Who Are We and What Should We Do? 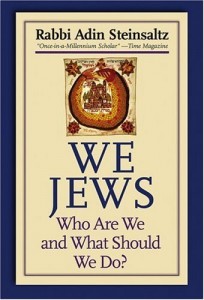 Rabbi Steinsaltz explores the most important issues that concern Jews today as Jews. He provides wise and uplifting answers to some of the questions that affect Jews everywhere, whether they have a firm religious identity or remain largely unfamiliar with their heritage:

In this book, Rabbi Steinsaltz sees causes and consequences, examines achievements and failures, looks at the contemporary world, and observes the dreams and longings of modern Jewish people. Written as an intimate and inspiring internal memo to the extended Jewish family, We Jews grapples with these questions and many more in a way that is at once groundbreaking, honest, and insightful.

Read the reviews of We Jews from Midwest Book Review and Booklist.

Excerpted from We Jews: Who Are We and What Should We Do (Jossey-Bass, 2005), Chapter IX.

What is the inner nature of the Jew? It appears that the most complete definition of the essential Jewishness can be found in the words that were spoken close to the time when the Torah was given. These words have great importance because they outline the great purposes, the all-embracing principles.

“And now, if you will hearken to my voice and keep my covenant, then you will be to me a special people of all the nations, for all the earth is mine. And you shall be to me a kingdom of priests and a holy nation; these are the words that you shall say to the children of Israel” (Exodus 19:5-6).

These words were an introduction to the general nature of Judaism before the transmission of the details. The reply of the people to these words was as follows: “And all the people answered together, and said: All that God has spoken we shall do” (Ibid.: v.8) This is a decisive answer, the inward acceptance that precedes all the commandments that came afterward in the Ten Commandments and in the whole Torah that followed.

“A Special People” With More Responsibilities

Three elements are mentioned in these verses, and all of them join together in defining the inner essence of the people of Israel. The first definition is “a special people.” This term has been given many interpretations. In a certain sense this is the definition of a chosen people, the acceptance of which is accompanied by a feeling of superiority and sometimes one of pride, but is also perceived negatively by those who see it as an attitude of self-importance.

However, the basic meaning of “a special people” is in fact “a unique people.” This uniqueness, the placing of a certain group of people in a role, in a place, in some form of commitment, has an effect on this group, as it affects the individual who attains any level of uniqueness. It implies various aspects of elevation, and even of pride in the special role, in the special status.

But this uniqueness has another facet, no less significant, which is expressed in the sharpest manner by the Prophet Amos (3:2): “You only have I known of all the families of the earth; therefore I will punish you for all your iniquities.” The status of being chosen is not only a matter of rights or of a higher standing, but also of duties associated with this special status, which derive from it and perhaps even precede it.

Being singled out in every way means not only being recognized as different from others, but also being the object of criticism that is much more severe. This severe criticism does not necessarily come from the envious and the haters: God himself says that the very status of being chosen demands greater and special attention. Many things that might be overlooked in others cannot remain unmentioned and unnoticed when they concern a person who has the special status of being chosen.

In addition, there is another, more comprehensive significance for a special people. Choice and uniqueness mean being separate, different, and to a great extent also alone, or isolated. The acceptance of this loneliness, even if it is the loneliness of the peak, is difficult.

Individuals, like nations, do not always want to be in a state of isolation. Particular people will sometimes go to any lengths to stand out in a crowd, to be different; however, they still want this difference to be no more than a label – some mark of recognition, but not a cause for isolation. But to be in a constant state of uniqueness means to be alone, as the prophet of the nations, Balaam, says of us: “[T]hey are a people who dwell alone and are not reckoned among the nations” (Numbers 23:9).

This loneliness has many practical outcomes. People in general cannot and do not even want to protect or guard those who are alone. To be alone also engenders a sense of strangeness, and sometimes even of hate, that derives from the inability of the chosen person to become integrated within the general stream of things – an inability that is not necessarily based on some inward difficulty or problem, but is the result of the choice itself.

Pagan anti-Semitism – and there have been examples of this phenomenon in the Greco-Roman world – was focused especially on this issue of separateness, of the otherness of the Jews, who were not fully integrated into the surrounding society. All the other details, both correct and incorrect, that have been added to this accusation are merely attempts to define the basic sense of public discomfort with those who, in spite of the prevalence of a uniform culture, live in it without merging into it completely, and maintain their particularity everywhere and in all circumstances.