The Mishna on our daf presents a case where a husband who is leaving to travel from his home in Judea, offers his wife a conditional divorce. As explained by Abaye in the Gemara, the husband actually makes two conditions: 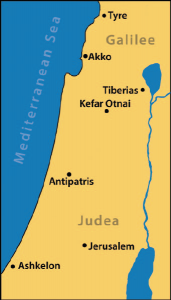 Antipatris is a city in the northern part of Judea. It was built (or reestablished) by King Herod, who named it after his father, Antipater. The city stood at a major crossroads, and it was a resting place for travelers and soldiers. It was not destroyed during the revolts against the Romans, and stood for hundreds of years. Archaeologists place Antipatris near today’s Rosh ha-Ayin.

Kfar Otnai was a small city on the southern edge of the Jezreel Valley in the lower Galilee. It is seen as the first point in the Galil when traveling from the south of the country. The city was on the border between what was known as the land of the Kutim and the Galilee, and was likely a mixed community of Jews and Kutim. It is placed a few kilometers north of today’s community of En Ganim.

Gittin 77a-b: When One Throws a Bill of Divorce

The eighth perek of Massekhet Gittin begins on our daf. Entitled ha-Zorek - i.e. someone who throws a ge%t -…

Gittin 75a-b: On the Condition that You Nurse My Son

The Mishna on our daf discusses cases of a divorce that is dependent on fulfillment of a condition. If the…

Gittin 75a-b: On the Condition that You Nurse My Son

The Mishna on our daf discusses cases of a divorce that is dependent on fulfillment of a condition. If the…