The Mishna describes the nisukh ha-mayim -the water libation on Sukkot – which was done together with the daily tamid in the morning. Water was brought from the Shiloah spring up to the Temple with great fanfare. 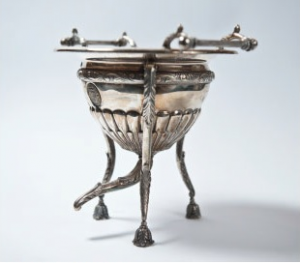 One would fill a golden jug with a capacity of three log with water from the Siloam pool. When those who went to bring the water reached the Gate of the Water, so called because the water for the libation was brought through this gate leading to the Temple courtyard, they sounded a tekia, sounded a terua, and sounded another tekia as an expression of joy. The priest ascended the ramp of the altar and turned to his left. There were two silver basins – there into which he poured the water…And the appointee says to the one pouring the water into the silver basin: Raise your hand, so that his actions would be visible, as one time a Sadducee priest intentionally poured the water on his feet, as the Sadducees did not accept the oral tradition requiring water libation, and in their rage all the people pelted him with their etrogim.

The background to this story involves the different sects that lived during the Second Temple period and their approaches to the Oral Law taught by the Sages. Many of the kohanim were tzedukim, who did not accept the traditions of the Sages. Unlike nisukh ha-yayin – the wine libation – which is clearly written in the Torah, the nisukh ha-mayim – the water libation – was a tradition handed down from Moshe on Mount Sinai, and it was not accepted by the tzedukim.

The particular story referred to in our Gemara is described at great length by Josephus. According to him, the individual who poured the water on his feet rather than on the altar was the Hasmonean King Alexander Yannai, who rejected the teaching of the Sages. After the people – who supported the interpretation of the Sages – pelted him with etrogim, the king summoned the non-Jewish guard, and they killed many of the people who were on the Temple grounds..

Sukka 49a-b: Down the Drain

In the Land of Israel, the holiday of Sukkot is seven days long and the "eighth day" of the holiday…

In the Land of Israel, the holiday of Sukkot is seven days long and the "eighth day" of the holiday…