Much of this daf  is devoted to a description of the plan of The Temple Mount itself, with detailed descriptions of the area from the Ezrat Yisrael (Court of the Israelites) and south of it. The furthest north that a Jewish person who was not a kohen could enter was the Ezrat Yisrael . Kohanim were allowed in the Ezrat Kohanim (The Priests’ Courtyard), as well.

Rabbi Eliezer ben Ya’akov reported on the set-up of the Temple:

The Ezrat Nashim was an open square of 135 cubits by 135 cubits. In each corner of the square were small, open courtyards, each of which was 40 square cubits.

Each of these courtyards served a specific purpose: 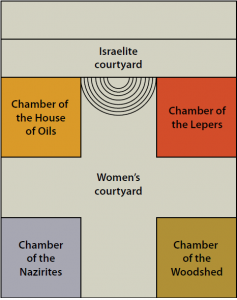 Women’s courtyard and its chambers 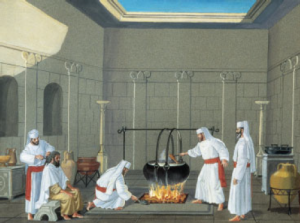 Chamber of the Nazirites

With regard to the southwest chamber, Rabbi Eliezer ben Ya’akov said: I forgot what purpose it would serve. Abba Shaul says: They would place wine and oil there for the meal-offerings and libations, and it was called the Chamber of the House of Oils. From this mishna it may be inferred that the who taught the mishnayot in tractate Middot is Rabbi Eliezer ben Ya’akov, as that is why the mishna finds it necessary to mention that he forgot the purpose of one of the chambers. 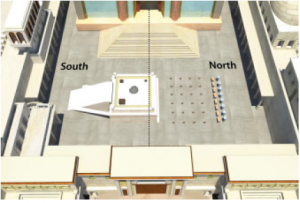 Altar in the middle of the courtyard, according to Rambam

With all the detail that appears in the Gemara, there are still a number of things that are left unexplained. For example, the azara – an area that included not only the altar, but the area of the slaughterhouse, as well – is not clearly detailed. The Gemara teaches that the altar was in the middle of the azara, opposite the entrance to the Holy and the Holy of Holies. Since there had to be room for the apparatus of the slaughterhouse, including taba’ot (rings to hold the animals), shulhanot (tables on which the animals were butchered), and nanasim (hooks on which the animals were hung), the Rambam explains that only part of the altar was opposite the entrance to the ulam (Sanctuary) and the heikhal (the Temple proper). The kevesh (ramp) leading to the mizbe’ah (altar) was to the south, leaving room on the northern side for the tables, rings and hooks.

Yoma 15a-b: The Sprinkling of the Blood

Yoma 15a-b: The Sprinkling of the Blood