The Mishna (30a) teaches that the kohen gadol immersed in the mikveh five times during the course of the Yom Kippur Temple service. All of these tevilot (immersions) took place in an office called the beit ha-parva, except for the first one, which took place on top of the water gate, which was near the office of the kohen gadol.

Abaye comments on this that the water source for these mikva’ot, a spring called Ein Eitam, had to be 23 cubits higher than the ground level of the Temple itself, since we know (based on a Mishna in Massekhet Middot 2:3) that the gates in the Temple were 20 amot high, and the mikveh that stood above the water gate needed to be at least three cubits deep in order to hold the correct amount of water. There is a difference of opinion involving Tosafot and the Ge’onim about the three cubits needed for the mikveh. The Ge’onim understand that the extra three cubits are needed to accommodate an average person, and generally speaking people are about three cubits tall. According to Tosafot three cubits is the normal height of a person, not counting his head. The logic here is that when a person enters the water, his body mass displaces enough water to cover his head, as well. 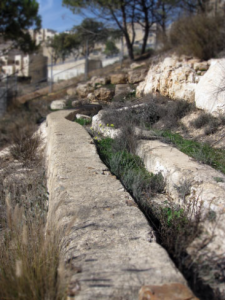 Section of the lower aqueduct, which carried water to Jerusalem over the course of many generations 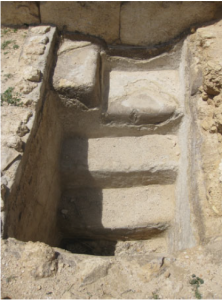 The Ein Eitam spring is identified as the third of Solomon’s Pools, which are located about three kilometers south-east of Beit Lehem, not far from the present-day community of Tekoa. From this spring, as well as others in the vicinity, there is a lengthy channel – more than 20 kilometers – that winds between the Judean mountains and through underground tunnels, carrying water to the Temple Mount. The Ein Eitam spring today stands 760 meters above sea level, which is about 25 meters above the height of the Temple Mount.

With the destruction of the second Temple, this channel was destroyed, as well. It was later rebuilt and was part of the water system that brought water to Jerusalem for generations.

Yoma 32a-b: Finding a textual source for the ritual immersions on Yom Kippur