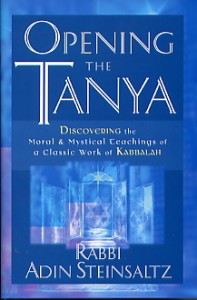 Discovering the Moral & Mystical Teachings of a Classic Work of Kabbalah through Rabbi Steinsaltz’s English-language Commentary.

Written by Rabbi Schneur Zalman of Liadi at the end of the 18th century, the Tanya is often considered to be one of the central, modern Jewish books on morality and human behavior. Intended as a book for every man and woman, the Tanya is an aid for anyone who wants to walk the “long shorter way” to becoming closer to the Divine. 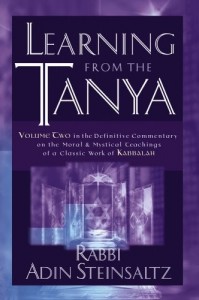 While the Tanya sets some very high goals, its great achievement is that it addresses the permanent, ongoing struggle within the self. It does not offer a solution to the strife of the spirit, but it helps its readers to understand themselves and to explore their spiritual life.

The Tanya does not promise an easy way, but there is a lot of understanding and, despite its high goals and demands, much empathy for those who stumble and rise again.

Rabbi Steinsaltz’s commentary on the first 12 chapters of Tanya can be found in Opening the Tanya: Discovering the Moral and Mystical Teachings of a Classic Work of Kabbalah (Jossey-Bass, 2003).

Learning From The Tanya

The second installment of his Tanya commentary, on chapters 13 to 26, are featured in Learning From the Tanya: Volume Two in the Definitive Commentary on the Moral and Mystical Teachings of a Classic Work of Kabbalah (Jossey-Bass, 2005).

Volume three of the commentary, covering chapters 27 to 37 of Tanya, is featured in Understanding the Tanya, released in August 2007.